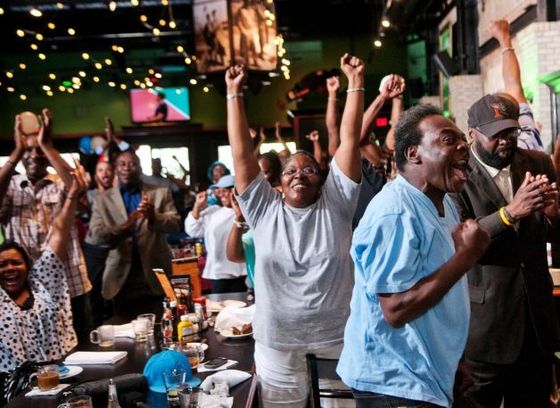 Do you know what a standing 8 count is? Basically, the Ref stops the fight, looks deep into the eyes of the punchee and says, “umm, are you okay? do you know where you are? that looked like it really hurt…”

Swedish middleweight Anna Laurell definitly knows what a standing 8 is. Yesterday, she got a 4th Round lesson from T-Rex. For Claressa it was the icing on a huge come-from-behind victory in the Olympic quarterfinals. Watch the entire fight with a cable login here:

Or read about it here:

Overall, a nail biter. Ressa lost the first round. Was still losing after the second round. Tied it up at the end of the 3rd. And then just exploded in the 4th. The final score was 18-14 and Rex now is the proud owner of “at least” a bronze medal. But who doesn’t have a bronze? Gold is the goal. And Kazakstan is up next. Semifinals. Wednesday at 230pm London time. That’s 930am in New York. That’s 630am in California (no excuses Cali!). Again, the internet is the best way to watch but check your local TV listings. BBC in London. NBC in America. YouTube in Gambia. Here’s a link:

Think yesterday was big? Tomorrow is going to be massive. Tune in! If you think that yelling and cheering in front of a television or a computer will have no bearing on the outcome, you are wrong. T-T-T-T-REX!!!!